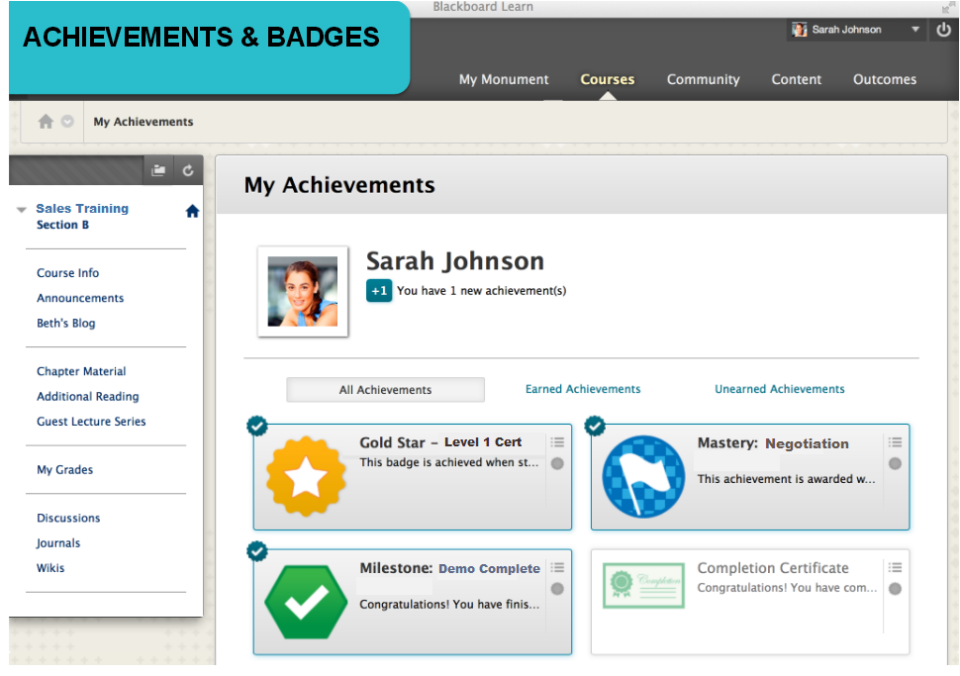 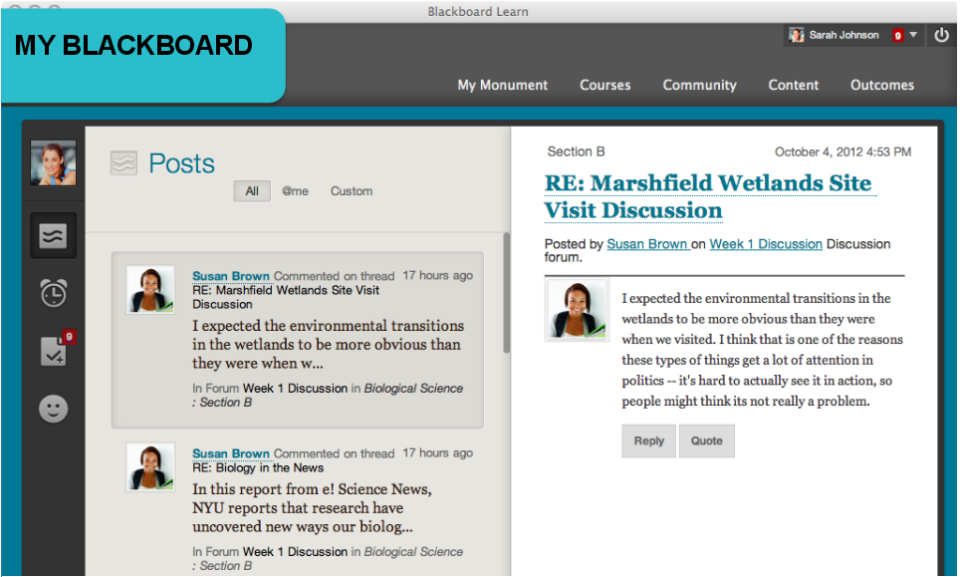 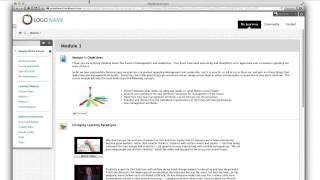 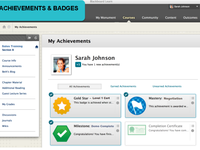 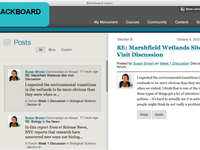 Commenti: My overall experience with Blackboard LMS Business is always amazing! It has helped and improved my grade so much because it lets me know ahead of time when assignments are due, which has helped be more organized as well. I love this software so much and I suggest everyone to use this!

Vantaggi: A feature that I love the most about this software is it allows teachers to upload assignments online to eliminate the use of paper. This software is such an easy to use software and really simple to change any settings for the liking of your choice. What I also love about this is that it is a good platform to take tests and quizzes, which is super amazing because it is not confusing at all. I absolutely love this and it has helped be more organized!

Inconvenienti: A feature that I would like to see in the future is the mobile app, it could use a little improvement and it is a bit slow, but the desktop version is amazing so it does not really bother me because I usually check and do everything through my desktop. I still absolutely love this software.

"A decent LMS, but there are better ones out there that have less workability issues"

Commenti: I have used both Blackboard and Moodle in the past, and I found them very similar for what they offered. I would have been fine using Blackboard indefinitely had I not found out about Canvas, which is what we are using now and I am absolutely it's biggest fan!

Vantaggi: I used Blackboard for almost 10 years, and it was a decent LMS for my needs. When Blackboard Collaborate came out, it was even better because it added a new layer of possibilities (I could have several webinar/conversations going, merge conversations, and/or present to different groups at one time). However, there were always bugs in the system, even though we updated constantly. The Blackboard app was also very limited.

Inconvenienti: Too many bugs and freezes; many of my students had issues with accessing links when they used different internet browsers. Good for a small school or business, but not larger ones.

Commenti: Quick background, was in high tech sales and marketing for many years prior to teaching and heavily involved with custom Computer Graphics systems since Time Arts Lumena was around (predecessor to Photoshop). Check out my LinkedIn profile for more details. On to the product review -- I've been using Blackboard for *many* years, and have been teaching (and doing) Web Design and Development since 1993. I'm retiring shortly, so I can be absolutely frank and honest about my experience with this app without fear of upsetting IT folks or admins that I would have to work with in the future. Truthfully, the ONLY reason I use this app is because I have no alternative at the College where I teach and it gives the students easy access to information, but so would any LMS (Learning Management System). The UIX (User Interface Experience) is incredibly archaic and counter-intuitive. It's also painfully slow to use, as it does constant server requests (just paste the URL for a Blackboard connection into http://www.webpagetest.org/ for testing). Sometimes one single click every 15 seconds is all the system will react to when I'm using the grade book, etc. -- in the "real" world, without captive users, no one would ever return to a site with those response times. To be fair to Blackboard, part of that may (or may not) be our schools network or Blackboard interface setup. As far as usability, Blackboard needs to let the User Interface and UIX designers (if they even had any) direct the techs and coders. It's *very* obvious that it's been the reverse, . They should 'steal' some Apple UIX people and give them some *real* power to direct how the app works and what it looks like. I've just finished using Blackboard for 3 hours+ doing things that should have taken 1 hour or less had the interface been optimized and more thought out. For example, under the 'Assignments' and 'Course Documents' sections there is no easy way to reorder or batch select using something basic like check boxes or a multi-select hot keys. Also, any NEW assignment or document post goes to the BOTTOM (the absolute reverse of a Blog post) So I need to drag it back to the top (where it logically should go). However, even that is awkward, since when I drag to the top of the browser the window does not auto-scroll. I have to hold the left mouse button at the same time as I use my middle finger to roll the mouse wheel -- duh!!. There IS a small text window pop-up accessed via an archaic icon to reorder posts, however, that shows only 5 assignment titles at a time (no window resize function to show more than 5). I can reorder them there, but need to do a single mouse click each time it moves up one position, but again, with no way to see more than 5 and no way to multi-select. So, if I have 50 course documents and want to shift 5 new documents to the top (where they belong) that's almost 250 mouse clicks to re-position 5 documents to where they should be in the first place - duh!! In Gradebook it only shows 10 students listed by default. I can change the setting up to 50 but the next time I go back it's back or need to refresh something -- it's back to 10. It doesn't save defaults or give me a choice. This may seem to be nit-picking, but over the period of a 14 week semester that's a lot of wasted time time and clicks. I'm going to end my review here as I have more work to do, but when I saw a 4 star review for this LMS being the solo review I had to balance it out. Bottom line is, the concept is good -- many, many modules/tools in a LMS bundled package but the execution is absolutely awful. Just Google search 'Blackboard sucks' or 'I hate Blackboard' if you want real faculty and user opinions sans any marketing spin. Other telltale signs are when a company start to lose long-term clients. Ryerson University in Toronto just did a switch from Blackboard after "a multi-year consultation process". More on that process is here http://lms.blog.ryerson.ca/ Hopefully that last paragraph doesn't get censored, because that's the source of raw truth.

Vantaggi: 1. it's an LMS and something is better than nothing.
2. It's full of examples I can show my students on how not to do UI and UIX
3. Well established company is behind it
4. Modular front-end
5. Many bells and whistles

Inconvenienti: 1. Counter intuitive, clunky, awkard UI (User Interface) - improve it by hiring UI/UIX experts and giving them actual control over the app interface and functions.
2. Slow (even when on the same network node or high speed cable connection) - needs a code rewrite/optimization.
3. Ancient aesthetics (although some design elements are now "flat design-ish") - hire UI and UIX designers and actually allow them to direct the final interface.
4. Many glitches (I've a folder full of screen-shots, if you want proof) - again a code rewrite needed, or ideally a complete start-over with newer code philosophies and methods.

"BlackBoard as a student"

Commenti: It's super easy to navigate and find all your resources on. It's well organized and I love it.

Vantaggi: I really like using blackboard. It is a lot better than other programs I've had to learn for school. It is super easy to navigate. You can find all your assignments there. There's a calendar to make when assignments are due. My favorite part I think, is the fact that you can email another student through blackboard. So if you are doing a project and you've never met your partner, or don't have their information, you can email them through blackboard.

Inconvenienti: There really isn't anything that I don't like about it.

Commenti: My overall experience with Blackboard Learn was optimal as a student in college.

Vantaggi: I found this advantageous when I was in college as an undergraduate. It was great to track my course work and online assignments through this LMS. For its time it was adequate with the UI layout but to modern look and feel of websites and web application software in 2020 it would be outdated unless they revamped the display of everything.

Inconvenienti: It was just a bit clunky at times and occasionally a pain in the @$$ but it still got the job done. It might have been that my student user rights weren't fully configured and there was a lack of training from the university for students to use the tool and not on the fault of Blackboard Learn.