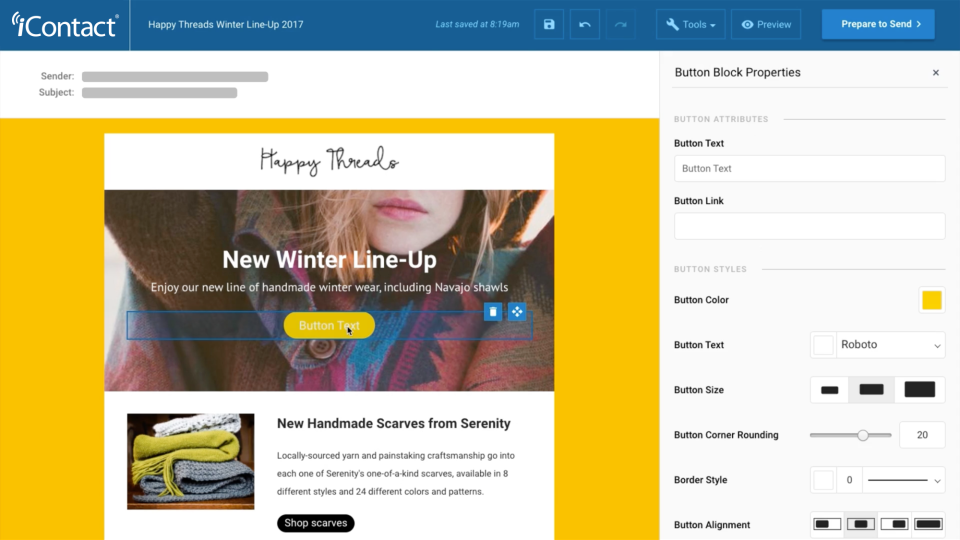 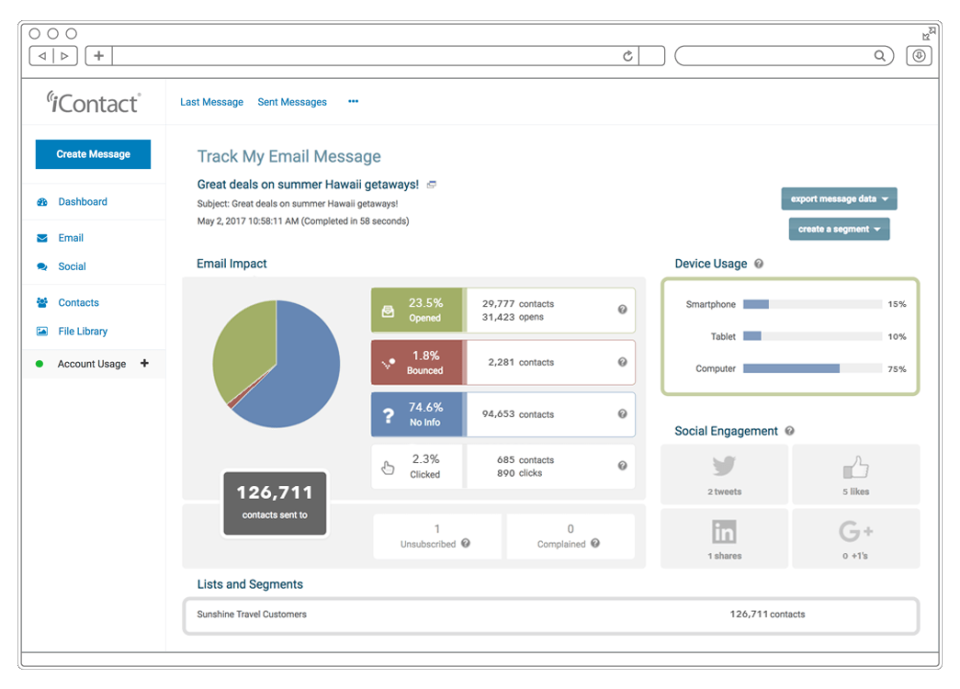 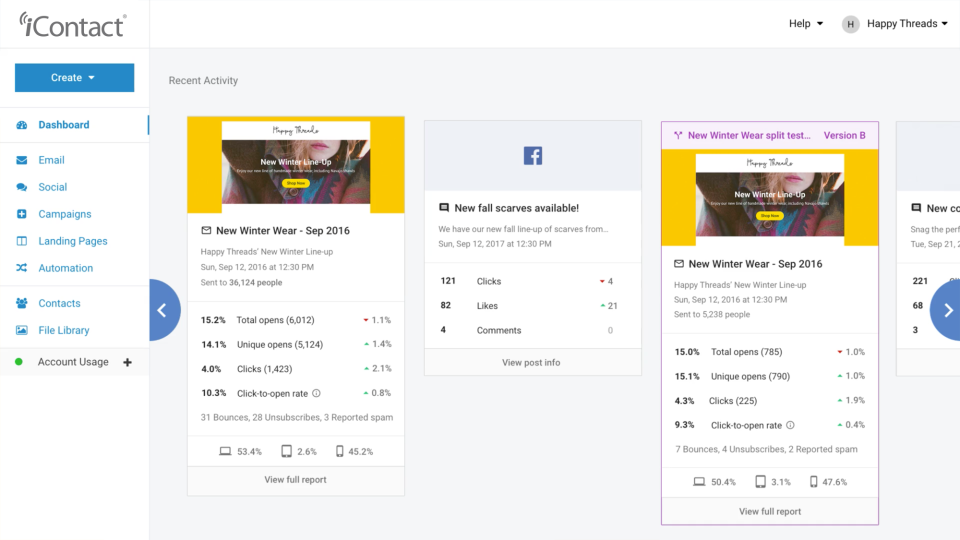 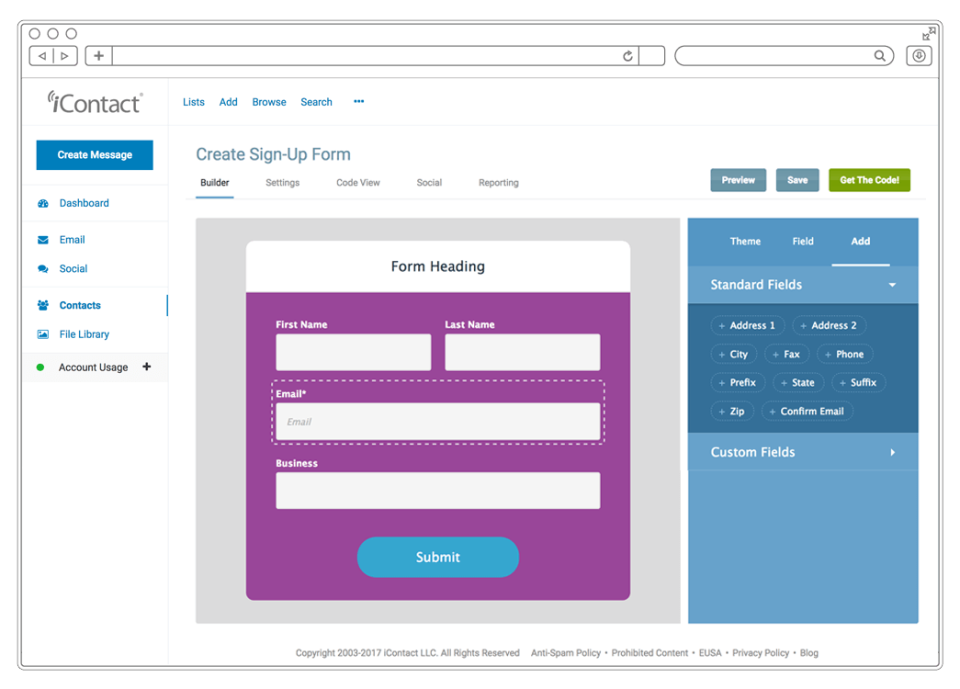 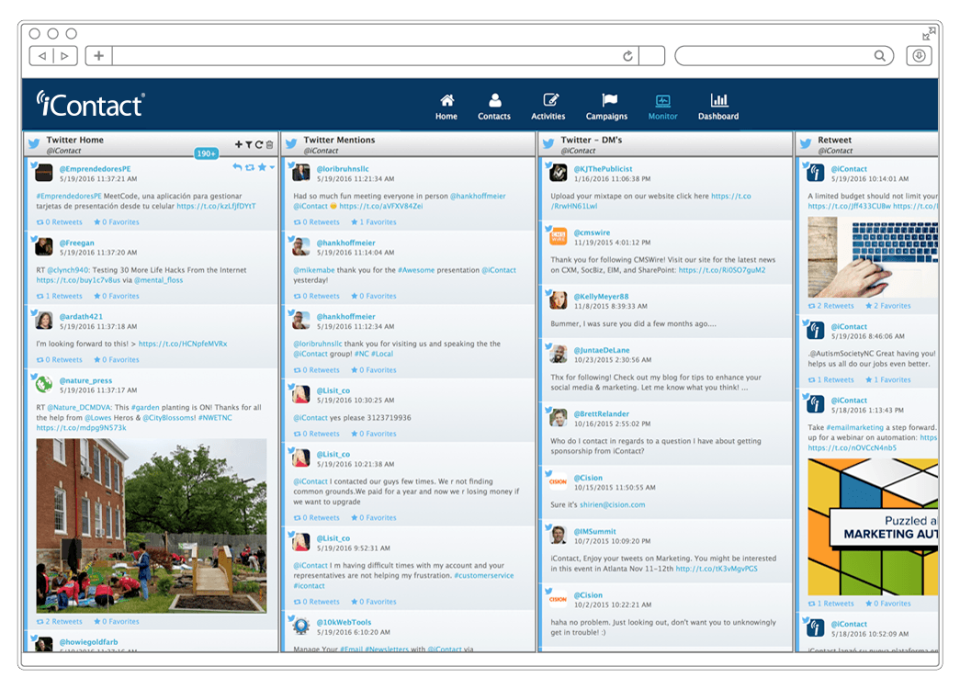 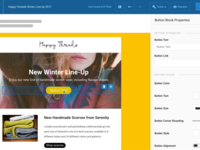 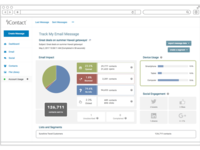 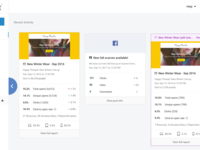 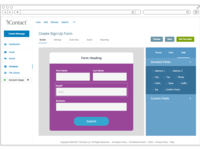 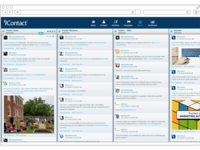 "iContact helps me be successful at my job"

Vantaggi: iContact is a very user friendly product for anyone. My company sends thousands of emails a week and we are always very pleased with how easy it is to create an email and send it immediately. I also really enjoy the dashboard, it helps me keep track knowing what emails have been sent and what emails I have yet to send. i also appreciate that iContact technology can delete any duplicate people in a contact list. That saves me time from having to go through thousands of people making sure I don't have any duplicates. My customer support is also amazing. My iContact rep. is always so good about getting back to me when I have questions or concerns.

Inconvenienti: Sometimes when I am creating a contact list in iContact, I have several excel sheets I need to upload to that one contact list...iContact doesn't let me select multiple excel sheets to upload at once, I have to do one at a time which takes a lot of extra time for me to do. I also wish I could delete more than one contact list at once. On the "upload contact" box, I want to be able to see the whole title of my contact list. Sometimes iContact cuts off my list title if it's too long, I would like to see the whole title...

Hi Lauren! We sincerely appreciate you taking the time to provide this feedback. Our support team loves helping companies like HireLive who make such a tremendous positive impact. As for the concerns you raised about list uploading, we are taking all product improvement comments very seriously and are working to continually improve our product. We currently do allow you to have 5 concurrent uploads at any given time, but you must start the uploads one at a time. And you are correct, we cannot upload multiple sheets from one excel file. We have noted this potential feature, along with multiple list deletion, and title expansion ¿ and we realize its importance. Thank you again and have a great day!

"Works great for us"

Commenti: We've had to contact support a couple of times and they have been helpful. The level we purchased isn't a comprehensive marketing solution. But we came back to it after having trouble with ClickDimensions, it actually works better.

Vantaggi: When I want to send out an email, I go into my list of prior emails, make changes, and send. It's very easy. It has all of the functionality we need for sending out bulk emails.

Inconvenienti: The editor is a bit clunky. It does take a bit of time to create a new email format. Sometimes it doesn't behave like it is supposed to. But once you save that new format you can use it over and over.

"Great and easy to use email marketing compaign solution"

Commenti: Experience has been great with this solution and very effective by the way. Highly recommended and will continue to use it and explore new functionality.

Vantaggi: Even if you are not familiar with email marketing campaigns iContact makes the process a breeze with intuitive user interface and automated processes and even greater templates.

Inconvenienti: iContact offers a large number of integration but we (not the norm) had a number of issues with these that fortunately with help of a great support team got resolved in no time.

Vantaggi: iContact is a low cost solution for basic email marketing. You have access to a strategic advisor. My strategic advisor always provides thorough answers and/or solutions when requested. iContact offers automation with workflows that are easy and quick to build. The user interface is easy to understand.

Inconvenienti: The response time to fix API issues can be slow. iContact does not offer a post unsubscribe survey. I'm not able to download user profile information when exporting email send statistics - this is important for me when I want to do a quick analysis on my data.

Thank you very much for being a long time iContact customer! We are happy to hear that you have been able to quickly and easily design automations with workflows using your iContact Pro account. We like this feature so much we plan to make it available to all iContact accounts. Thank you as well for your feedback, particularly about adding a post unsubscribe survey. This is being shared with our Product Management team so that it can be reviewed for possible updates in a future release.

"Be sure to cancel -- they auto-renew"

Commenti: There are other more-integrated models that make work more efficient. I would recommend those models instead of iContact. The features all work, but applications like Network for Good make things easier, faster, more efficient for me.

Vantaggi: Things worked fine. If you don't use the software frequently, it can be hard to master. I wish the layout was a bit easier to work with, but it is not terrible. The platform does what it says it can do in the advertising.

Inconvenienti: I had to double enter a lot of info with my fundraising software and then to i-contact. There was a lack of integration that I found frustrating. Leaving iContact was a pain also. My organization signed a contract for annual subscription, so I assumed we would have to re-upp at the end of each year. That is pretty typical. It turned out though, the fine print of the contract says that customers must specifically put in a cancellation in writing. Even though the charity I worked with started using another service, iContact demanded payment for a period of time after we had made the switch. I personally found that in poor taste. Other subscription models I am familiar with don't do that. Be better than that, iContact.